Skip to content
May 27, 2018May 27, 2018 ~ Cakeordeath ~ 53 Comments
One of the most important of the Austrian Symbolists, Alfred Kubin was the master of macabre art and the morbid image, who, in his insistence upon portraying all the horrors lurking just beneath the surface in the unconscious mind, can reasonably be said to have anticipated the Surrealists.

His life reads like a cross between a Freudian case study and a decadent fiction. He didn’t meet his father until he was two and afterwards he only felt, ‘hate, hate, hate’ towards him. His beloved mother died when he was ten and the following year he lost his virginity to a pregnant friend. This unhappy childhood led to his abortive suicide attempt on his mother’s grave when he was nineteen. He joined the army but that resulted in a nervous breakdown.

After discovering the works of Odilon Redon (Visionary Noir), Edvard Munch (Madonna and Soul on Fire), James Ensor (The Entry),  and Felicien Rops (Les Diaboliques Kubin decided to devote his life to art. Other major influences were the works of Max Klinger (A Glove) and Goya (The Sleep of Reason), especially in their use of aquatint.

Kubin worked primarily as a book illustrator, mainly of Gothic and fantastic fiction, notably Edgar Allen Poe, E.T.A Hoffman and Gustav Meyrick. In 1906 he married the half-Jewish heiress Hedwig Grundler and they moved to an isolated 12th century castle in Upper Austria, where he was to remain to his death. The marriage was a success, much to everyone’s surprise as Hedwig had a heavy morphine dependency that required frequent hospitalizations.

Kubin was a friend of both Paul Klee and Vasily Kandinsky and did show with their Blauer Riter group, however his avant-garde involvement ended by the time of the WWI.

Kubin was also a talented writer and his brilliant proto-surrealist novel The Other Side  of 1909 (which I intend to write about in detail at some point) was much admired by his friend Franz Kafka and also by that troubling genius of German letters, Ernst Junger. 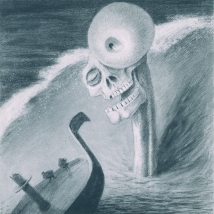 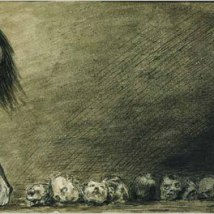 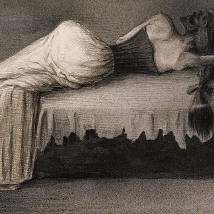 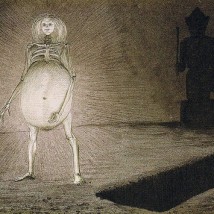