A supremely thought provoking and troubling  philosophical painting by the Belgian Surrealist Rene Magritte. We are presented with a meretriciously drawn image of a pipe while beneath the neat legend paradoxically informs us that Ceci n’est pas une pipe (This is not a pipe). It seems that before us is less a painting than another one of Magritte’s  monstrously banal, and ultimately terrifying, pictorial mysteries.

The pipe drawn with such painstaking exactitude is of course just a representation of a pipe. You cannot hold in your hands, stuff it with tobacco and smoke it, which is surely what is required of a pipe for it to be a pipe. Yet we feel perplexed and somehow obscurely cheated. If it the case that ‘perception always intercedes between reality and ourselves’, then all we can know are images of the world, and images are by their very nature treacherous. All we have is the map, and as everyone knows, the map is not the territory.

In late 1929-early 1930 the poet, photographer, theoretician and co-founder of the Belgian Surrealist Group Paul Nougé created a series of 19 photographs that were collected and published as Subversion des Images in 1968. The series lives up to the title, subverting and questioning perception in the manner of his friend and fellow co-founder Rene Magritte, who is featured in several of the images. 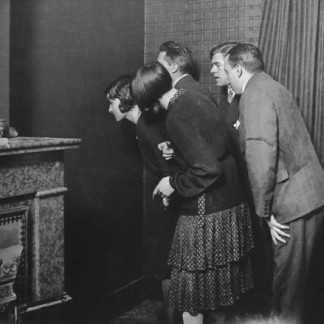 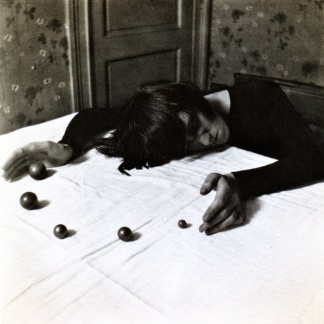 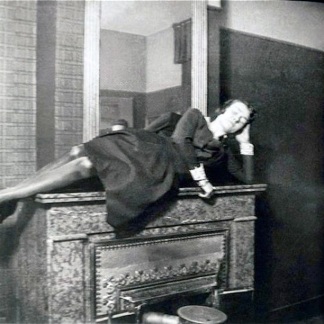 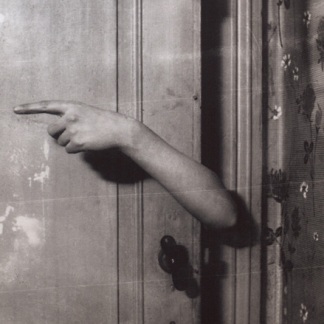 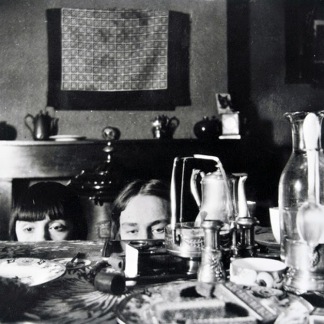 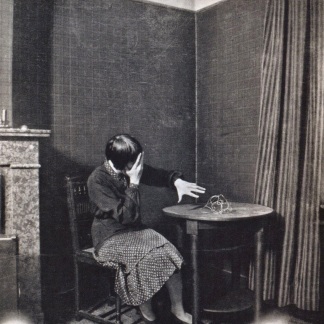 Woman Frightened Of String-1929-1930
April 9, 2017April 9, 2017 ~ Cakeordeath ~ 27 Comments
In a Technical Sense. Webster’s hand hesitated on Karen Novotny’s zip. He listened to the last bars of the Mahler symphony playing on the radiogram extension in the warm bedroom. ‘The bomber crashed on landing,’ he explained. ‘Four members of the crew were killed. He was alive when they got him out, but at one point in the operating theatre his heart and vital organs failed. In a technical sense he was dead for about two minutes. Now, all this time, it looks as if something is missing, something that vanished during the short period of his death. Perhaps his soul, the capacity to achieve a state of grace. Nathan would call it the ability to accept the phenomenology of the universe, or the fact of your own consciousness. This is Traven’s hell.’

Talbot. Another face of the central character of The Atrocity Exhibition. The core identity is Traven, a name taken consciously from B.Traven, a writer I’ve always admired for his extreme reclusiveness-so completely at odds with the logic of our own age, when even the concept of privacy is constructed from publicly circulating materials. It is now almost impossible to be ourselves except on the world’s terms.

April 9, 2017April 9, 2017 ~ Cakeordeath ~ 25 Comments
The Atrocity Exhibition. Entering the exhibition, Travis sees the atrocities of Vietnam and the Congo mimetized in the ‘alternate’ death of Elizabeth Taylor; he tends the dying film star, eroticizing her punctured bronchus in the over-ventilated veranda of the London Hilton, he dreams of Max Ernst, superior of the birds; ‘Europe after the Rain’; the human race-Caliban asleep across a mirror smeared with vomit.

Elizabeth Taylor , the last of the old-style Hollywood actress, has retained her hold on the popular imagination in the two decades since this piece was written, a quality she shares (no thanks to myself) with almost all the public figures in this book…A unique collision of private and public fantasies took place in the 1960’s, and may have to wait some years to be repeated, if ever. The public dream of Hollywood for the first time merged with the private imagination of the hyper-stimulated 60’s TV viewer…our perception of the famous has changed-I can’t imagine writing about Meryl Streep or Princess Di, and Margaret Thatchter’s undoubted mystery seems to reflect design faults in her own self-constructed persona. One can mechanically spin sexual fantasies around all three, but the imagination soon flags. Unlike Taylor, they radiate no light.

April 8, 2017April 8, 2017 ~ Cakeordeath ~ 18 Comments
The motion picture studies of Ronald Reagan Reagan’s hairstyle. Studies were conducted on the marked fascination exercised by the Presidential contender’s hairstyle. 65 percent of male subjects made positive connections between the hairstyle and their own pubic hair. A series of optimum hairstyles were constructed.

At the 1980 Republican Convention in San Francisco a copy of my Reagan text, minus its title and the running sideheads, and furnished with the seal of the Republican Party, was distributed to delegates. I’m told it was accepted for what it resembled, a psychological position paper on the candidate’s subliminal appeal, commissioned from some maverick think-tank.