Allied with the artists of fantastic realism, H.R Giger and Sibylle Ruppert are two notable examples of the style that I have previously written about, Poumeyrol developed his style away from erotica, painting mysterious  interiors devoid of human beings but filled with the ghostly traces of absent inhabitants, noticeably numerous fetishistic drawings adoring the walls. The hushed surroundings are bathed in a peculiar pellucid light; gradually the hint of horror that these paintings undoubtedly contain reveals itself  in the eerie calm of these meretriciously rendered spaces

Below is a selection of paintings covering various stages of his career. Information is rather scarce regarding dates and titles, surprising for such an excellent artist of singular vision, however that is the vagaries of reputation and fame. 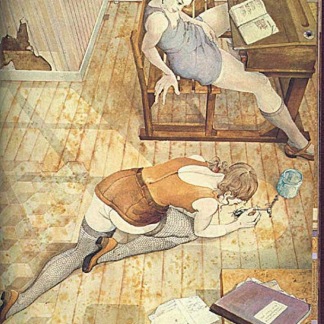 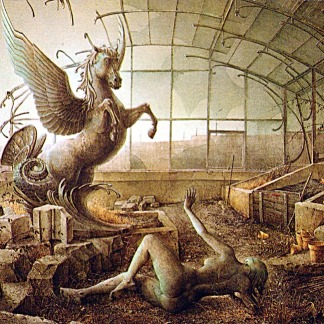 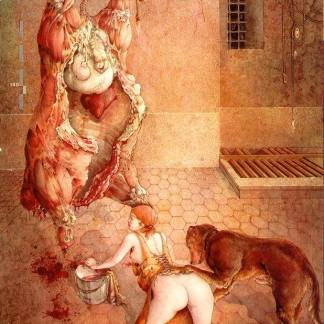 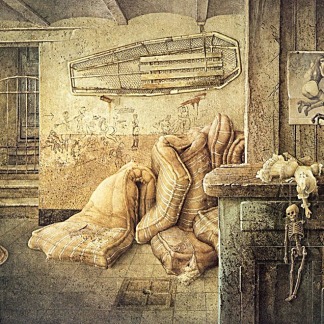 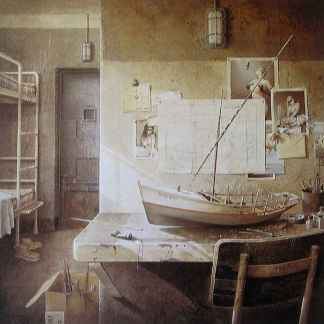 The figure of Jean-Jacques Lequeu, with his bizarre architectural fantasies, disconcerting self portraits and obscenely lascivious figures is an enigma. In some respects Lequeu seems very much of his time, a Utopian Neoclassical architect working in the tradition established by his more famous revolutionary contemporaries Claude-Nicholas Ledoux and Étienne-Louis Boullée, whose visions also largely existed only on paper, forever unbuilt, and yet also strangely Modern, indeed Post-Modern. This Proto-Surrealist aspect of Lequeu led one art critic to conjecture that Marcel Duchamp himself altered  Lequeu’s work while working in the Bibliothèque nationale de France, in order to create a suitable precursor as well as enacting some form of recondite revenge on Le Corbusier. Unfortunately for this rather droll conspiracy theory, Duchamp worked at the Bibliothèque Sainte-Geneviève and not at the Bibliothèque nationale.

The little we do know about Lequeu does nothing to dispel the mystery. Born in Rouen he worked under several architects in that city, carrying out projects on civil and religious buildings. He won a scholarship to study in Paris where he remained for the rest of his life, living above a brothel. He prepared a book that was to remain unpublished, Architecture Civile; however the projected buildings and gardens with their phantasmagorical blending of Classical, Egyptian and Chinese styles, monstrous Rococo excesses of ornamentation and wanton disregard of expense bore no relation to prosaic reality and Lequeu’s career stalled. He found work in the civil service as a surveyor and cartographer until his retirement in 1815. During the Revolutionary period he entered competitions organised by the Ecole des Beaux-Arts, where the various architects out-did each other in envisaging ever more grandiose schemes.

Towards the end of his life Lequeu, finding himself broke tried to sell his drawings without success and decided to donate 800 works to the Bibliothèque nationale de France. Dying in penury in 1826 it is discovered that his wardrobe contains a large collection of expensive women’s clothing, quite in keeping as Lequeu had produced two self portraits in drag.

The more explicit pornographic material mouldered in the the Enfer (Hell) section of the library. The Petit Palais, Paris recently held the first ever retrospective and the website of the Bibliothèque nationale de France, Gallica, has the entire Lequeu oeuvre online.

During the 1960’s and 70’s the Czech Surrealist Toyen gradually abandoned painting and concentrated on producing exquisitely dreamy drypoints and double-sided collages notable for their visual wit, conciseness and razor sharp composition.

As I have noted in a previous post Toyen lived in Andre Breton‘s studio after his death in 1966. Located slap bang in the middle of the red-light district I always fondly imagine that the elderly but still subversive and transgressive creator of these collages and the illustrator of Edition 69 would have been quite content in such a spot. 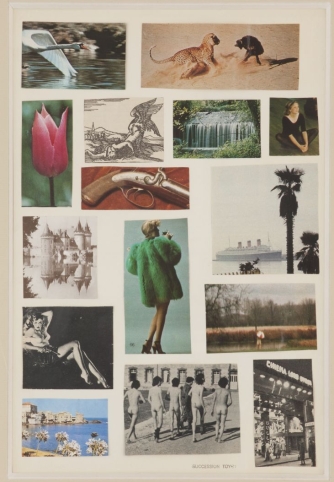 There is an anecdote about the young Yves Klein (see Dreams of Desire 48 (Blue) lying on a beach in the South of France with his friends, the artist Arman and the poet Claude Pascal, where they decided to divide up the universe between themselves.  Arman wanted the riches of the earth and tangible, material things, while Pascal claimed words and language itself. Klein chose ‘le vide’, the void, ethereal space empty of all matter.

Klein spent his career, cut short by his early death at 34, giving pictorial representation to the void, most famously in his blue monochromes using his own patented colour International Klein Blue, but also in the fire paintings, painted in his last years. Klein was something of an esotericist and was familiar with Rosicrucian and alchemical doctrine. As he noted ‘…fires burn in the heart of the void as well as in the heart of man.‘

The above golden monochrome is part of a triptych (the other colours are blue and pink) that represents the colours seen in the heart of a flame. In a lecture given at the Sorbonne, Klein further elaborated on the transformative and unifying  nature of fire . ‘Fire is both intimate and universal. It resides in our hearts; it resides in a candle. It rises up from the depths of matter, and it conceals itself, latent, contained, like hate or patience. Of all phenomena it is the only one that so obviously embodies two opposite values: good and evil. It shines in paradise, and burns in hell. It can contradict itself, and therefore it is one of the universal principles.’  Such comments are reminiscent of the patron philosopher of occultists, the gnomic Heraclitus who remarked that ‘everything is fire.’

Klein made his fire paintings using a flame thrower on specially treated cardboard. Supplementary techniques were also involved to evoke a synthesis of the four classic elements, for example a nude model would be moistened with water and directed to leave an imprint on the surface before Klein applied the flame. 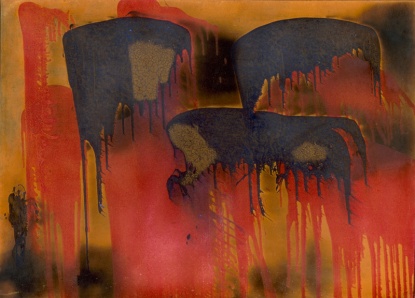 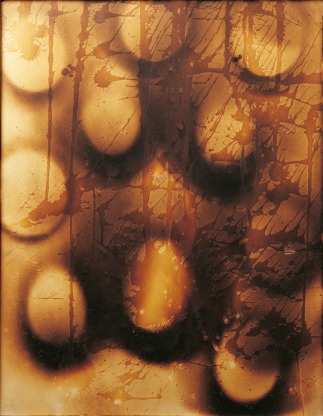 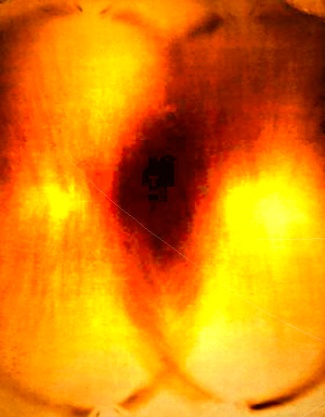 Picabia’s career spanned many movements across continents, but is best remembered for his involvement with Marcel Duchamp, Man Ray and Arthur Craven in the creation of New York Dada and his mechanomorphic drawings from 1915 onwards. Always on the move and with entry to every fashionable social circle, Picabia moved to Barcelona then to Zurich for the remainder of WWI. Asked to describe his impressions of the War, Picabia remarked that he was bored to hell. After WWI he moved back to Paris and participated in further Dada shenanigans with Tristan Tzara and Andre Breton, contributing ferocious manifestos for Dada events which he watched from private boxes with the mistress of the time.

With a nature both aristocratic and anarchic, Picabia rapidly lost patience with the various groups and movements and would denounce Dada and later Surrealism. From 1925 he returned to painting with a vengeance after a ten year hiatus, working on the Transparencies series which involved multiple images confusingly superimposed. Then in the forties came the nudes copied from girlie mags; astonishingly unaesthetic, these paintings are so appalling that you cannot stop looking and in a certain respect represent the culmination of Picabia’s anti-art stance.

You are all indicted, stand up! It is impossible to talk to you unless you are standing up.
Stand up as you would for the Marseillaise or God Save the King.

Stand up, as if the Flag were before you. Or as if you were in the presence of Dada, which signifies Life, and which accuses you of loving everything out of snobbery if only it is expensive enough.

One dies a hero’s death or an idiot’s death – which comes to the same thing. The only word that has more than a day-to-day value is the word Death. You love death – the death of others.

Kill them! Let them die! Only money does not die; it only goes away for a little while.

That is God! That is someone to respect: someone you can take seriously! Money is the prie-Dieu of entire families. Money for ever! Long live money! The man who has money is a man of honour.

Honour can be bought and sold like the arse. The arse, the arse, represents life like potato-chips, and all you who are serious-minded will smell worse than cow’s shit.

Hiss, shout, kick my teeth in, so what? I shall still tell you that you are half-wits. In three months my friends and I will be selling you our pictures for a few francs.

Francis Picabia-the Blonde and the Brunette 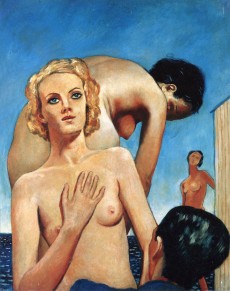 Francis Picabia-The Women at the Sea