Almost immediately after the publication of Party Going at the onset of WWII, Henry Green handed over to his publisher the manuscript to Pack My Bag, his ‘interim’ autobiography (at 35), that he had written at top speed in a matter of weeks. After the slow process and completion of Party Going, the gates must have opened. Other contributing factors was Green’s fear of imminent death in the war, hence the title which were the last words of the philosopher F.H Bradley, and the fact that Green was reportedly completely drunk the entire time of the writing process.

In Pack My Bag we find a passage that is as close as Green ever got to stating an artistic credo:

Prose is not to be read aloud but to oneself alone at night, and it is not quick as poetry but rather a gathering web of insinuations which go further than names however shared can ever go. Prose should be a long intimacy between strangers with no direct appeal to what both may have known. It should slowly appeal to feelings unexpressed, it should in the end draw tears out of the stone …

Green volunteered for the London Fire Service during the Blitz, the experience of which formed the basis of his next novel Caught. His wife Dig had moved away from London to the countryside and as the time was one of general ‘unmarriedness’, Green indulged in numerous extra-martial affairs. Dig would tolerant these liaisons, even befriending the women involved.

His next novel Loving was published in 1943 and is Green’s most well know and popular novel. In The Paris Review interview with Terry Southern he describes the genesis of the novel:

I got the idea of Loving from a manservant in the Fire Service during the war. He was serving with me in the ranks, and he told me he had once asked the elderly butler who was over him what the old boy most liked in the world. The reply was: “Lying in bed on a summer morning, with the window open, listening to the church bells, eating buttered toast with cunty fingers.” I saw the book in a flash.

Curiously enough Loving was published at the same time as his friend Evelyn Waugh’s novel Brideshead Revisited, which is also set in a large country house. But whereas Brideshead Revisited is a nostalgic paean to a rapidly vanishing way of life, wistfully conveying a time where everyone knew their place and was grateful for it, from the loyal servants to the obliging lords of the manor, Green was too clear-eyed to be having any of this self-serving sentimentality. His portrayal of down-stairs life resembles Jonathan Swift’s masterful satire Directions To Servants much more than the obsequious, incidental characters offered by Brideshead Revisited or indeed its present day variation that peddles the same insidious fantasy, DowntonAbbey.

In a master stroke, Green’s country estate is set in neutral Ireland, a country he knew well and had great fondness for, owned by Anglo-Irish gentry and staffed entirely with English staff with the important exception of the symbolically incomprehensible Irish lamp-man Paddy O’Conor . This immediately places the narrative in the realm of absurdity. The owners of Kinalty are, appropriately enough, the Tennants. However the novel is much more concerned with life down-stairs, in particularly the over-promoted and unscrupulous butler Charley Raunce and his much younger girlfriend, the housemaid Edith  In his usual oblique, off-hand way Green introduces an ambiguous apocalyptic note regarding the future of Kinalty: The Blue Drawing Room is, we are told, ‘the most celebrated eighteenth-century folly in Eire that had still to be burned down.’ However this fear is only vaguely in the background, all the characters, whether up-stairs or down-stairs are too busy pursuing their respective love-interests or lining their pockets and stomachs to spare much thought to all that imperils their precarious paradise, whether it be the war raging back home, the IRA or indeed the intrinsic absurdity of Kinalty, where even the dovecotes are modelled on the Leaning Tower of Pisa.

In 1946 Green published Back, which concerns a wounded war veteran returning to civilian life. It is certainly his most sombre novel, however it contains one of his most sustained passages of lyricism:

…climbing around and up these trees of mourning, was rose after rose after rose, while, here and there, the spray overburdened by the mass of flowers, a live wreath lay fallen on a wreath of stone, or on a box in marble colder than this day, or onto frosted blooms which, under glass, marked each bed of earth wherein the dear departed encouraged life above in the green grass, the cypresses and in those roses gay and bright which, as still as this dark afternoon, stared at whosoever looked, or hung their heads to droop, to grow strained, to die when their turn came.

I will be concluding this series on Henry Green in part three with brief reviews of his last three novels and his later life.

Henry Green remains the most elusive and neglected of modernist writers, even though he was among the top rank of prose stylists in English in the 20th century. However when you are not just a writer’s writer, but a writer’s-writer’s writer, as his friend the Beat novelist and screen-writer Terry Southern noted in his interview of Green for The Paris Review, then maybe a degree of obscurity and anonymity is to be expected.

Henry Green was the pseudonym of Henry Yorke, an aristocrat and industrialist, for most of his life he was managing director of the family firm of Pontifex. After a childhood spent in large and imposing country houses he attended Eton (at the same time as fellow novelists and friends Evelyn Waugh and Anthony Powell) and Oxford, though he dropped out of Oxford to work in the company’s Birmingham factory. By the time of his departure from Oxford he was already a published novelist, his astoundingly assured debut Blindness coming out when he was only 19. His time on the factory floor was the inspiration for his second novel Living, which is thoroughly modernist with its cinematic dissolves and dropped articles and displays a Chekhovian sympathy and understanding of his mainly working class characters. His friend Christopher Isherwood called it, “the best Proletarian novel ever written,” however as Green drily noted, Isherwood had never worked in a factory.

The thirties saw a hiatus in his literary career, after a glittering society wedding he was too busy being a Bright Young Thing and socializing with the Aga Khan in the South of France, (though he complained about travel being an inconvenience, as it interfered with his masturbation), and the Guinnesses (which included Diana nee Mitford and soon to be Mosley) at fancy dress balls, and there was a ten-year gap before his third novel Party Going, which is perhaps my favourite of all is works (though it is a hard choice), was published in September 1939, just before the onset of WWII.

In 1937 a somewhat depressed Green had written, “what pleasure or interest I ever took in anything, or what potential there was to take pleasure or interest, malicious or otherwise, is leaving me so that I have started writing again to try to make a world of my own.”  The world he constructed in Party Going is one only Green could have created. On the surface Party Going is concerned with the anxieties and amorous manoeuvres of a group of privileged and incredibly vapid young people waiting for a train  to take them to the Continent. The station is fog-bound and no trains are either arriving or leaving, so to while away the time they sequester themselves in the station’s hotel. Alliances form and dissolve, the characters get entangled in a muddle and confusion of their own-making. And that is basically it, yet it is hard not to conclude that there is a lot more going on underneath this deceptive surface. It has been remarked that the fog represents “a paradigm of life, life surrounded by a fog of death and threatened Departures,”.  Maybe because of the long gestation of Party Going, the tone and style itself shifts, at the beginning the dropped articles recall his previous novel Living, however the novel becomes more expansive around a third of the way in, this change further disorients the reader, adding an extra dimension of uncertainty and unease. The novel, which had seemed to be merely a comedy of manners takes on a Kafkaesque turn while also anticipating Beckett.

The war was to prove to be a fruitful period for Henry Green, which will be the subject of Part Two. To end this post here is a short example from Party Going of Green’s effortlessly stylish prose:

“So now at last all of this party is in one place, and, even if they have not yet all of them come across each other, their baggage is collected in the Registration Hall. Where, earlier, hundreds had made their way to this station thousands were coming in now, it was the end of a day for them, the beginning of a time for our party.”

The publication of Les Fleurs Du Mal by Charles Baudelaire in 1857 can rightly be judged as the birth of Modernity. Baudelaire’s innovation wasn’t in style or technique, but in the bold, shocking subject matter, (that would lead to obscenity trials) and its depiction of a sordid, urban milieu. As well as the poems themselves, Baudelaire as a perceptive art critic would have a great influence upon emerging young artists determined to break with convention and tradition, notably Edouard Manet (see Olympia Press: A Brief History of DBs which features his groundbreaking painting Olympia from 1863).

(This is a revised version of a post that originally appeared here September 2016, in order for to fit in with the Dreams of Desire Series. If you like this post or my many other stories, poems, essays then my collection Motion No. 69 will be available for sale on 30th November 2017.) 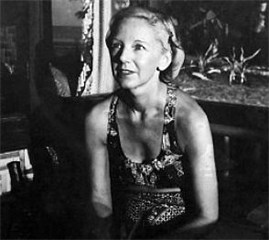 Anne Kavan is inevitably smiling in photographs. It was that smile which initially intrigued me. I was browsing through My Madness when I saw the photo that served as the frontispiece. It shows a rather smart
middle-aged woman beaming away at the camera. The contrast between the blurb which alluded to drug addiction, mental breakdown and confinement in psychiatric institutions and the photograph of a lady who obviously lunched at expensive Kensington restaurants was too incongruous.  Here, I felt, was a mystery. I brought the book and went home to found out something about the enigmatic Anna Kavan.