One of the most disturbing articles in the provocative Surrealist magazine Documents is Michel Leiris essay The ‘Caput Mortuum’ or the Alchemist’s Wife, which details Leiris encounter with the American Lost Generation travel writer and occultist William Buehler Seabrook.

Leiris had favourably reviewed Seabrook’s book on Haiti, The Magic Island for Documents and he readily agreed to a meeting. Leiris was very impressed with Seabrook, who narrated a story about a man who had come face to face with God. Shortly afterwards  Leiris received some startling photographs from Seabrook of a woman in a leather mask. Leiris meditations on the photographs form the body of the essay which raises disquieting questions regarding identity and desire.

The American photographer Man Ray also met Seabrook in Paris around the same period and Man Ray tells several anecdotes concerning Seabrook in his autobiography Self Portrait. Man Ray shot several photographs of tableaux arranged by Seabrook, as well as the photographs of Seabrook with the marvellous Lee Miller.

Man Ray frequently photographed his lovers in embraces with other women, notably Lee Miller and her room-mate Tanja Ramm (though not the photograph of Lee and Tanja having breakfast in bed, that was taken by Lee’s father) and  later, Ady Fidelin with the ultimate Surrealist muse Nusch Eluard.

The totem-like masks were designed by Man Ray himself and certainly add an aura of strangeness and animalistic carnality to the scene. In the early 30’s in Paris, Man Ray had become involved with the Lost Generation American travel writer and occultist William Seabrook and had photographed several of Seabrook’s sadistic mise-en-scene involving masks. Seabrook’s sexual proclivities were also the subject of the extremely unsettling essay by Michel Leiris, The ‘Caput Mortuum’ or the Alchemist’s Wife, published in Georges Bataille magazine Documents. 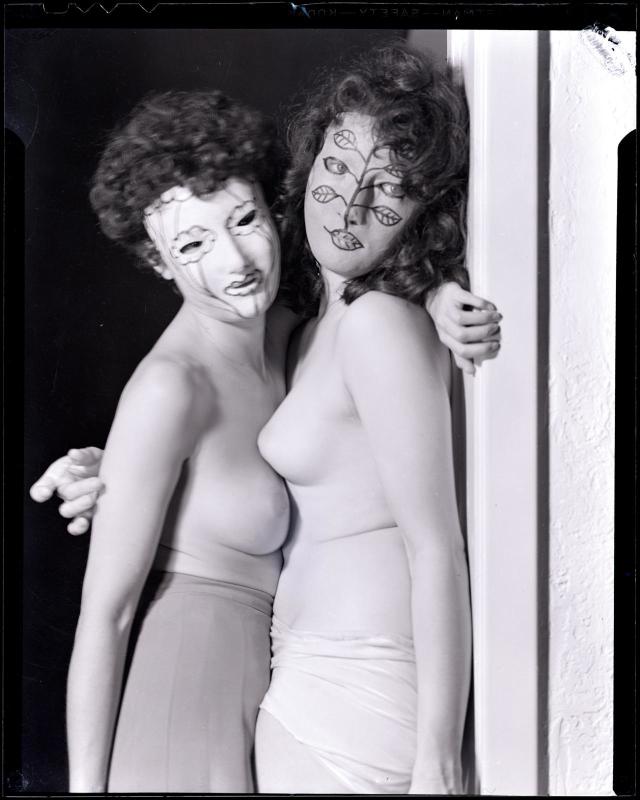