“The exquisite corpse shall drink the new wine.”

This was the phrase that was produced when the Surrealists first sat down to play the game that was to later be christened Exquisite Corpse. It was one of those happy accidents so beloved of the Surrealists and seemingly dictated by the collective unconscious mind ready to reclaim its rights.

The most celebrated of Surrealists techniques,  it tied in nicely with several key tenets of Surrealism; namely artistic collaboration and the belief that was first stated by Lautreamont that “Poetry should be made by all.” Originally played with words it soon become apparent that the technique could extend to drawing and collages. The examples from the Golden Age of Surrealism are numerous and feature some of the most illustrious names in 20th Century art and letters.

Below are some of the most notable Exquisite Corpses from that era. I have also included work from the YBA artists the Chapman Brothers who have produced a number of drawings using the technique.

J.G Ballard, the genre busting English science fiction writer responsible for such novels as The Drowned World, Crash, High Rise and Empire of the Sun as well as some of the finest short stories in world literature, frequently remarked that he really wanted to be a painter in the surrealist tradition that he so loved instead of a writer.

This deep reverence and constant engagement with the visual arts can be most clearly seen in his demented and wildly perverse cult classic collage novel The Atrocity Exhibition. Referencing Ernst, Dali, Magritte, Dominguez, Matta, Bellmer, Delvaux, Tanguy as well as Pop Artists Tom Wesselman and Andy Warhol in the frequent free association tests and ‘condensed novels’ that comprise the text, The Atrocity Exhibition could easily be used as a textbook primer on surrealism and popular culture in the sixties.

In 1990 RE/Search Publications issued an expanded edition with four new stories, Ballard’s bizarre yet illuminating annotations, disturbing illustrations by the medical illustrator/graphic novelist Phoebe Gloeckner and photographs by Ana Barrado of brutalist buildings and weapon ranges. It also features a preface by the Hitman for the Apocalypse himself, William S. Burroughs.

Below are some of the many paintings mentioned in the text, some of which are very well known and others less so. 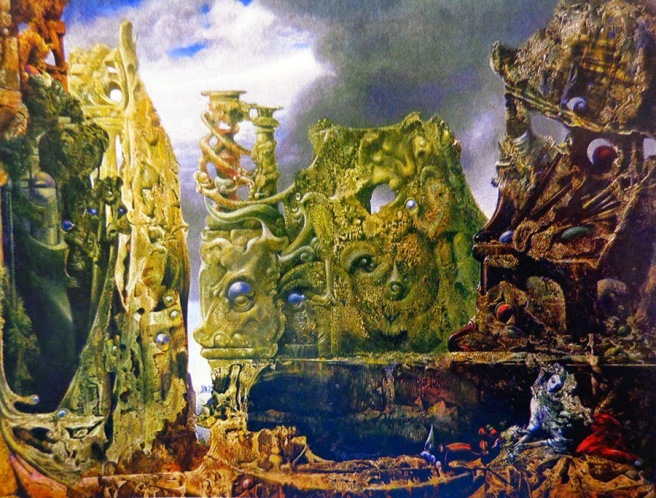 Writing over two centuries ago, the Marquis De Sade remarked with his characteristic poetic outrageousness and provocative flair, “It has been estimated that more fifty million individuals have lost their lives to wars and religious massacres. Is there even one among them worth the blood of a single bird?” As the Sadean scholar Annie Le Brun noted in her excellent The Reality Overload, Sade’s savage negation strikes us like lightning and is an invitation to view an inverted perspective that allows us to ask: what remains of the rationalist foundations we thoughtlessly ascribe to tolerance, humanism and ecology?

Or not, if you are a devotee of The New Optimists, who subscribe to the theory that we are living in the best of times and that the ultimate triumph of progress is inevitable, as long as we carry on the Enlightenment tradition of placing our faith in Reason and Science. Allied to the ‘End of History’ theory that Western style democracy and free market capitalism represents the death of ideology (we can all stop chasing those chimeras, neo-liberalism is the high water mark of political systems that provides the greatest good for the greatest number of people possible), the New Optimists, especially the High Priest of the movement, Steven Pinker, seek to show with quantitative data and any number of graphs that war, poverty and violence are at an all time low, and therefore we should dismiss any lingering unease about this fur-lined prison we inhabit and be happy. Anyone who doesn’t is an irrational, cynical ingrate who hasn’t learned the value of positive thinking.

Employing a Manichean worldview the New Optimists portray science, reason and humanism as unalloyed virtues that has produced all the good and none of the bad, all of which is entirely the product of anti-Enlightenment irrationality.  The criticism that the philosophes of the Enlightenment led to the technocratic genocide of the Holocaust (which is portrayed as a statistical blip), as advanced by the Frankfurt school is contemptuously dismissed out of hand; rather it was the Romanticism that arose as a rejection of reason that was the root cause of Nazism. Even the development of the nuclear bomb with its unprecedented capabilities of annihilation doesn’t overly concern the New Optimists, we could destroy all life on earth, but we haven’t yet, so uncork the champagne!

After surveying the five thousand years of human atrocities that we politely call history maybe the quantity of war and violence might be on a downward trajectory, but that doesn’t negate the suffering of the people in the numerous contemporary war zones one iota. The facile self congratulatory tone of the so-called rational optimists is appalling. Their belief in liberal progress and their denial of the powerful and necessary irrational forces within humanity speaks of a naivety that is neither touching or endearing, rather a dangerous and deluded wishful thinking.

To return to the opening quote by the Divine Marquis, one of the first thinkers who wasn’t blinded by the glare and dazzle of the Enlightenment, who realised the potential for tyranny committed in the name of progress, this furious contrarian understood the enshrinement of human reason would lead to the degradation and devastation of the natural realm. A realm humanity has constantly sought to be divorced from by a persistent denial of our very nature.

Quite recently I was researching H.R Giger’s illustrations for De Sade’s Justine when I stumbled across the work of the German artist Sibylle Ruppert. I immediately wondered how I had never heard of her before as I take some pride in being well versed in Surrealistic/Fantastic/Dark Art and here was an exceptional example of the genre, that furthermore took its cues from the masters of transgressive literature: De Sade (of course), Lautreamont and Bataille, all of whom I have written about.

One can only wonder at the vagaries of recognition. Although she did have some influential admirers, namely Alain Robbe-Grillet, Henri Michaux and especially Giger, who owned a large collection of her work (the only major retrospective to date was at the H.R Giger Musuem), the critical and commercial success that other Fantastic artists of the period enjoyed eluded her. Instead she worked quietly away at producing ever more horrific images from hell.

Born in Frankfurt in 1942 in the middle of a bombing raid of the city, Ruppert’s father was a graphic designer. She would sit entranced watching her father draw. One day she seized his hand and said that she would also draw nice colourful pictures like he did. Soon afterwards she presented her first drawing; it was a brutal picture of a fist striking a face. Sibylle was six at the time.

A determined  and driven child Sibylle would produce twenty drawings a day as well as studying ballet. Too tall to be a ballerina, she became a revue dancer, touring the world until one day in New York she decided to quit and dedicate herself to art. Sibylle returned for a while to Frankfurt, giving drawing instructions at the art school her father founded, then moved to Paris, where she exhibited for a number of years before resuming teaching.

As well as the literary influences cited above, all of whom she illustrated, visual traces and echoes can be observed of Bosch, Giger, Fuseli, Bellmer, Blake and Bacon, though this doesn’t in any way detract from her singularly visceral and kinetic imagination. In her paintings and drawings the flesh is always in motion; writhing, straining, collapsing, before undergoing the final monstrous transformation. A truly infernal vision that lingers unsettlingly in the mind.

In 1953 the German writer and artist Unica Zurn met a fellow German artist who was intimately connected with the Surrealists, Hans Bellmer. Ominously Bellmer reportedly remarked on first seeing Zurn, “Here is the doll,” a reference to the extremely disturbing series of photographs Bellmer had taken during the thirties and forties of an articulated mannequin of his own creation. The image of the Doll appear to be more of a crime scene reconstruction of some imaginary act of horrific violation than traditional works of art.

Zurn who had been barely been able to make ends meet in Berlin as a short story writer re-located to Paris to be with Bellmer. Here she socialised with the Surrealists and other artists who along with Bellmer encouraged and nurtured her writings and drawings, most notably in the anagrammatic poems and automatic drawings of Hexentexte (Witches Writing) from 1954.She also collaborated with Bellmer on a series of explicit sado-masochistic images that featured her tightly bound with rope.

During the sixties Zurn experienced a number of mental breakdowns that led her to be institutionalised. In 1967 her short semi-autobiographical coming of age novel Dark Spring was published. Dark Spring is an unbearably intense novel, astounding in its misogyny and masochism. It also foreshadows her own suicide by jumping out of a window three years later in 1970.

Bellmer died in 1975 and at his request was buried next to Zurn in Pere Lachaise Cemetery in a tomb marked Bellmer-Zurn. Posthumous writings of Zurn include the truly remarkable The Man of Jasmine which is a highly stylised account of her friendship with the writer Henri Michaux (author of the Miserable Miracle).

Below are some examples of her anagrammatic poetry and automatic drawings that Zurn produced throughout her career.

AND IF THEY HAVE NOT DIED

I am yours, otherwise it escapes and
wipes us into death. Sing, burn
Sun, don’t die, sing, turn and
born, to turn and into Nothing is
never. The gone creates sense – or
not died have they and when
and when dead – they are not.

YOU’LL FIND THE SECRET IN A YOUNG CITY

Youth sings: now the sea is your harbor. Is
dream and hunt, the spirit’s inner feast, that send
him into dark, stony days, yes, you! – and he’s
immune from hand and serious sense – yes, You! Victories are
found forebodings. You travel to the city of Jim-Sing.
Go into the youngest street and find Amin, the Ti.
He says: yes, no, once, never, enemy, courage, it, are, you, D,H,G.
Secret signature? Jade stone? You’ll find the meaning.

WILL I MEET YOU SOMETIME?

After three ways in the rain image
when waking your counterimage: he,
the magician. Angels weave you in
the dragonbody. Rings in the way,
long in the rain I become yours. 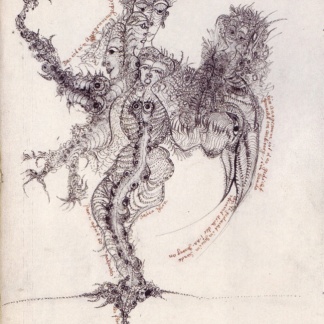 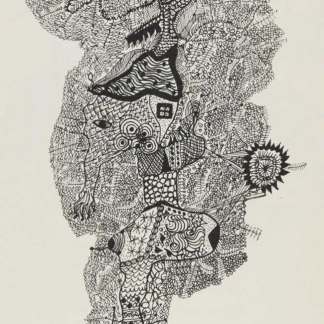 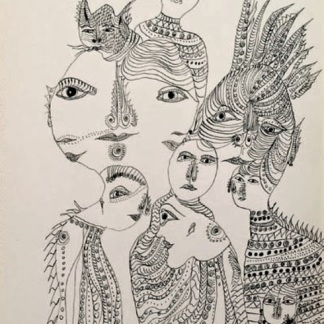 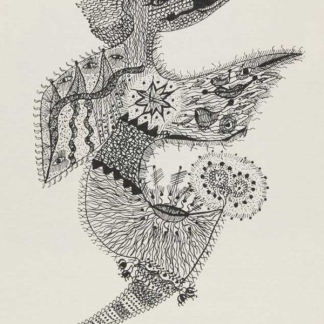