During the period when Baroque reigned supreme, overt eroticism all but disappeared from Western Art. It would take the emergence of Rococo, the florid, playful and frankly somewhat sluttish younger French sister of Baroque, to take art back into the boudoir.

Francois Boucher was one of the leading lights of Rococo and enjoyed the patronage of the prime mover of the style, Madame de Pompadour, the Official Chief Mistress of King Louis XV. As well as mythological genres scenes featuring Venus he painted two odalisques stripped of all allegorical trappings, the L’Odalisque Brune from 1745 and the L’Odalisque Blonde from 1752.

France was ongoing a vogue for the mysterious, exotic East during the Ancien Regime. Several libertine novels including Denis Diderot Les bijoux indiscrets (The Indiscreet Jewels) and Crebillon Fils La Sopha (The Sofa) are set in fantasy Oriental lands, partly to give full reign to the imagination but also to disguise the political satire on the luxuriant and decadent Court of Louis XV. Part of the attraction, for men anyway, were the stories of odalisques; mistresses or concubines in a harem.

Boucher’s L’Odalisque Brune from 1745 was reportedly a portrait of Madame Boucher , which led Diderot, Encyclopedist and somewhat risque writer of the above-mentioned  Les bijoux indiscrets and La Religieuse (The Nun) to state that Boucher was prostituting his wife.  L’Odalisque Blonde is a portrait of the courtesan Marie-Louise O’Murphy. King Louis XV was so taken with this painting that he arranged for Marie-Louise to become a petite maitresse (lesser mistress). At least one of her children was the King’s. 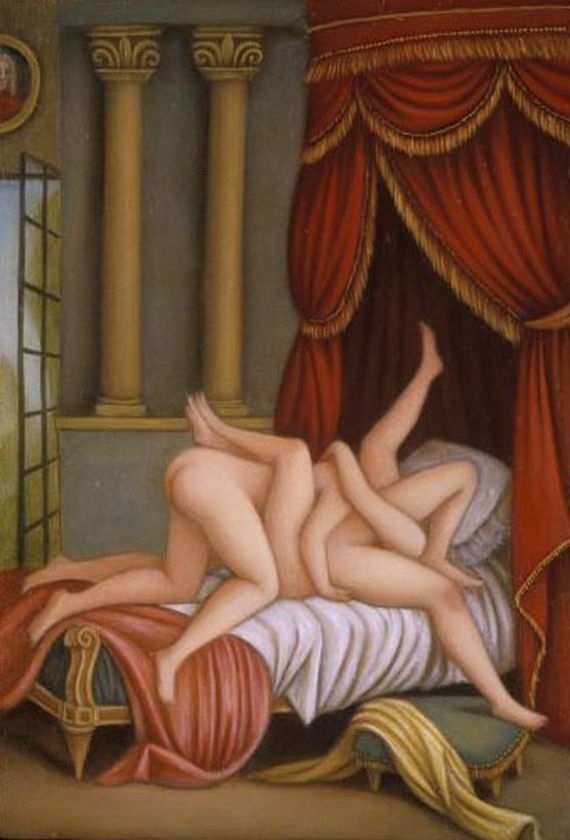 Along with a very sweet tooth I share with the Marquis De Sade a quasi-mystical obsession with numbers. Certain numbers that have cropped up recently suggested a piece on the 18th century libertine tradition in French which the Divine Marquis radically re-envisioned at its culmination.

Several novels including Diderot’s Les bijoux indiscrets (The Indiscreet Jewels) and Crebillon fils La Sopha (The Sofa) transposed the setting to Oriental locations to disguise the political satire of the court of Louis XV. Others were less cautious and set their novels in a contemporary setting with thinly veiled portraits of famous influential figures; the resulting scandals ruined careers and damaged reputations. Laclos the author of the masterpiece of libertine fiction and to my mind the greatest novel ever written, Les Liaisons Dangereuses (Dangerous Liasions) never escaped the notoriety that the book brought him; he unjustly became the byword for cynicism and Machiavellian scheming.

One of the central features of the libertine novel is the conflict between sense and sentiment that readers of Jane Austen will be familiar with. However unlike Austen they resolve themselves as an unsentimental education where the hero or heroine is taught the ways of the world and learns how to exploit others for their sensual gratification. As the prophet of the enlightenment Voltaire noted ‘Pleasure is the object, duty and the goal of all rational creatures’, and the aristocrats portrayed are above all rational creatures.

During their education, which always involves seduction and a subtle corruption the characters are taught about the moment. The moment is a key concept in libertine philosophy, it is when the object of desire is most susceptible to seduction. The newly minted libertines are made aware of when the moment is approaching, how to take full advantage of the moment and even how to manufacture the moment in someone who is inimical to seduction. The classic novels of sexual education are Crebillon fils  Les Égarements du cœur et de l’esprit ou Mémoires de M. de Meilcour (The Wayward Heart and Head or the Memoirs of M. de Meilcour) and the Marquis De Sade’s La Philosophie dans le boudoir ou Les instituteurs immoraux (Philosophy in the Boudoir or The Immoral Teachers). De Sade of course is notably more extreme than his predecessors and combines elements of the Gothic and Baroque while pointing forward to Romanticism and Decadence.