Brassaï’s close-ups of graffiti carved and painted on Parisian city walls were first seen in the Surrealist magazine Minotaure in 1933, however he would continue to photograph images of graffiti for the next three decades, culminating in the publication of the book, Graffiti, in 1961.

With this project, ‘the eye of Paris’ as he was called by his great friend Henry Miller, detects and captures the secret language of the walls and how the city itself is subject to alteration, defacement and obliteration by any passing hand or the vagaries of time. 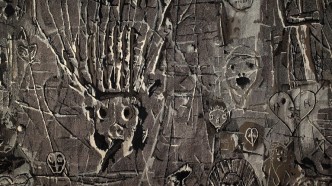 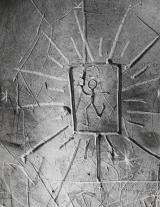 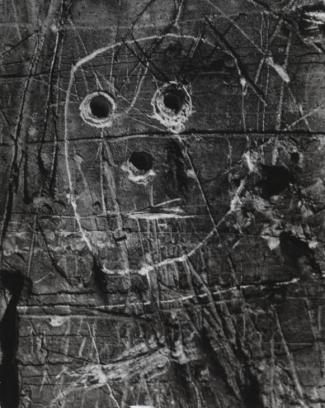 Andre Breton had ended Nadja with the bold statement that: “Beauty will be CONVULSIVE or will not be at all.” In L’Amour Fou (Mad Love) from 1937 he further expands on the theme with the declaration: “Convulsive beauty will be veiled-erotic, fixed-explosive, magic-circumstantial, or won’t be at all.” Accompanying the text are three photographs illustrating the types of convulsive beauty: Man Ray‘s Veiled-Erotic, a stunning nude study of the Swiss artist Meret Oppenheim, Fixed-Explosive also by Man Ray and Brassai‘s strange Magic-Circumstantial. All the images had previously appeared in the Surrealist magazine Minotaure. 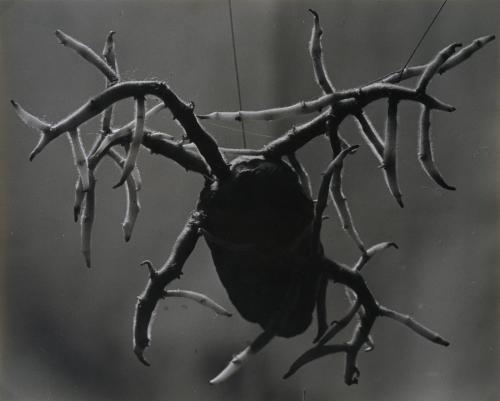 The startlingly titled and utterly bizarre photo-series Ode to Necrophilia by Hungarian-Mexican photographer Kati Horna, featuring as a model the brilliant Leonora Carrington, was published in the short lived but innovative Mexican avant-garde magazine S.NOB in 1962.

Born into a wealthy Jewish family in Hungary in 1912, Horna lived in Berlin and Paris before moving to Barcelona during the Spanish Civil War where she was empoyed as the official photographer for the CNT-FAI. Her groundbreaking war photographs that intimately portrayed the effects of the conflict on the civilian population was frequently featured in Spanish Anarchist journals Umbral and Tierra y Libertad as well as internationally. In 1939 she fled with her husband the Spanish anarchist José Horna, first to Paris then to Mexico. Mexico was the first choice for a number of left-leaning artists and intellectuals escaping Europe’s nightmare slide into fascism. It was here that she met Remedios Varo, the wealthy art patron Edward James, Benjamin Peret and later Leonora Carrington.

S.NOB was founded by literacy radicals  Salvador Elizondo and Juan Garçia Ponce and featured works by the Mexican avant-garde and European emigres with Edward James helping with funding to ensure artistic freedom. It ran for seven issues in 1962.

Below is a selection of images from the series. A quick note regarding the umbrella, which would appear to refer not only to Lautreamont’s famous dictum in Les Chants De Maldoror, ‘As beautiful as the chance encounter of a sewing machine and an umbrella on an operating table’, but also to one of her many outstanding photographs of the Spanish Civil War, Rally at Via Durutti, which I have also included.

Drawing on his cigarette, Al the Angle, coolly poised, as per usual, pauses before re-commencing in his deep, slightly slurred (is something lost in its translation through time and space?) voice.
“As always, I think we need a more oblique approach, pursue a different tack. Although common sense dictates that the map is not the territory, you will find, on further investigation, that this is not actually the case. The map is the territory, I repeat, the map is the territory. In fact, I will go even further and deeper to suggest that the representation of reality is more important than the landscape depicted. The idea of Atlantis, Agartha or Shambhala is more concrete than Imperial Rome, Phararonic Egypt or Ptolemiac Alexandria. The street plan of Mysterious Kor has greater claims to actuality than the highways and byways of London. The marvel that is the architectural drawings for The Very Heaven Heavenly Hotel reduces the MGM Grand Las Vegas to the vague and nebulous realms of fantasy.
“Which leads me to believe that your body, which is so self-evidently a map of Paradise, is the only trace of reality that I have so far encountered in this rather ersatz world. The promise of raptures that causes me to tremble on the threshold, (do I dare to enter the hidden hollows and crevices? Explore the valleys and scale the peaks? Brave the rushing rivers and flooding estuaries?), makes all the never-ending sunshine and low hanging fruit appear insipid and bland.
“So…I trust this has convinced you that we should begin to map out potentialities. Of course that may include us having a taste…a taste of the absolute Terra.”