The paintings of contemporary Italian artist Agostino Arrivabene are grounded in the techniques of the Old Masters and inhabit the timeless realm of dreams and mythological, religious archetypes. Against a  backdrop of either luminous darkness or apocalyptic landscape, figures that have haunted the collective unconscious for centuries or longer, Orpheus, Lucifer, Elizabeth Bathory, Persephone, enact sacred ritual dramas. Among  the memento mori lie the possibility of transformation and metamorphosis; an actualisation of becoming.

Arrivabene cites as influences the Symbolist Gustave Moreau, the master of the Northern Renaissance Albrecht Dürer and the Neo-Baroque/Kitsch artist Odd Nerdrum. Also discernible are traces of Max Ernst’s eroding mineral frottage derived inscapes, Giger‘s spectacular visceral transfigurations and Blake‘s sheer burning visionary intensity. In keeping with the Symbolist tendency towards drawing inspiration from literature elements of Ovid, Dante and Giordano Bruno are included within the occult and occasionally infernal worlds of Arrivabene.

Below is a selection of images showcasing Arrivabene’s unique art. For a more comprehensive view  please visit the artist’s website agostinoarrivabene.it. For details on the artist’s fascinating process visit the interview at the excellent Fulgur Press.

Standing amongst the ruins, surveying the damage,
We look out towards the horizon and beyond:
I can sense you keening to tearaway and abscond,
Cross the frontiers of limitations and language,

While I think only of dream homes and suicide;
Neither of which are really an ideal solution,
But possess the terrifying charm of temptation
For surely separate destinies could then coincide:

Picture us speeding through the roaring night,
Drawn irresistibly towards the final destination,
A painted backdrop against a scorching light,

That blazes and burns to the point of desecration,
During these last moments would our love abide
While we to the vast universe vainly confide?

Come here you, closer still,
I want you to be the first to know
That gold is all around this town
Beneath the streets & sewers,
Scattered haphazardly here there
Everywhere, enough to dazzle,
Blind the unwary with the glitter,
Shimmering dissolving glamour
When the sun shines again:
Do you have it within to dare?
To serve this magistery right?
To make the mad dream real,
Turn this place into Tenochtitlán,
Render into actuality El Dorado:
Do you possess the strength to will
Into existence all the power & glory
Of this metallic inhuman purity
The cold coalescence of stars?
After you have known, dared,
Willed these forces into being,
Now that you are experienced,
Initiated & illuminated can you
Keep a secret, will you remain silent?

My thoughts and as a consequence my dreams have been occupied by Prague lately, (a place I have never visited, incidentally), the city of Emperor Rudolf II with his court of alchemists, magicians, scientists and artists; where Dr John Dee and his medium Edward Kelley conjured up a vast array of angels in a Aztec obsidian mirror and Guiseppe Arcimboldo painted his bizarre composite portraits of visages made of fruit, branches, flowers and books. The city (fast forwarding three centuries) of Meyrink and his Golem haunting the ghetto; of Kafka and his monstrous metamorphoses, bewildering reversals and byzantine bureaucracies. The city of the incomparable Toyen.

Toyen’s phantasmagorical art is filled with images of transformation, of women becoming animals or vice versa, of sudden and terrifying shifts in size and scale, of spectral figures in the process of materialisation, of impossible desires becoming reality. Sometimes it seems that the decidedly ambiguous Toyen was channeling the entire occult and magical history of Prague.

The paintings that Toyen produced in the 1950’s onward, after Surrealism had shifted decidedly from revolutionary politics and towards the occult, frequently point towards the signs of Alchemist Alley, now Golden Lane. The black sun is the first stage of the magnum opus and also refers to the dissolution of the body and hence the ego.

I have included a selection of Toyen’s magnificently compelling paintings of metamorphosis and phantasmal  figures.

In many respects the brilliant but baffling Dr John Dee is the archetypal Renaissance man and magus. Mathematician, astronomer, expert in navigation, advisor to Queen Elizabeth I and the man credited with coining the term ‘British Empire’, Dee was also a very serious magician and occult philosopher who devoted much of his life to the study of astrology, alchemy, divination and the summoning of angels.

In 1564 Dee published his enigmatic treatise on the Monas Hieroglyphica, a symbol of his own design meant to express the mystical unity of all creation. The text was probably devised as a brief introduction to symbolic language; after piquing the learned reader’s interest Dee would presumably then offer to provide personal tutelage on the subject.

The glyph makes an appearance in one of the founding documents of the Rosicrucians, the alchemical allegory The Chymical Wedding of Christian Rosenkreutz. Quite how it ended up there is explored in detail in Francis Yates’s fascinating The Rosicrucian Enlightenment.

Above is the frontispiece to an early edition published in Antwerp. Below are selected images of the glyph from the treatise, as well as John Coulthart’s stunning variation of the Monas Hieroglyphica.

I will leave you with concluding words of the treatise, which could really serve as the guiding maxim for all alchemical/esoteric literature.

Here the vulgar eye will see nothing but Obscurity and will despair considerably. 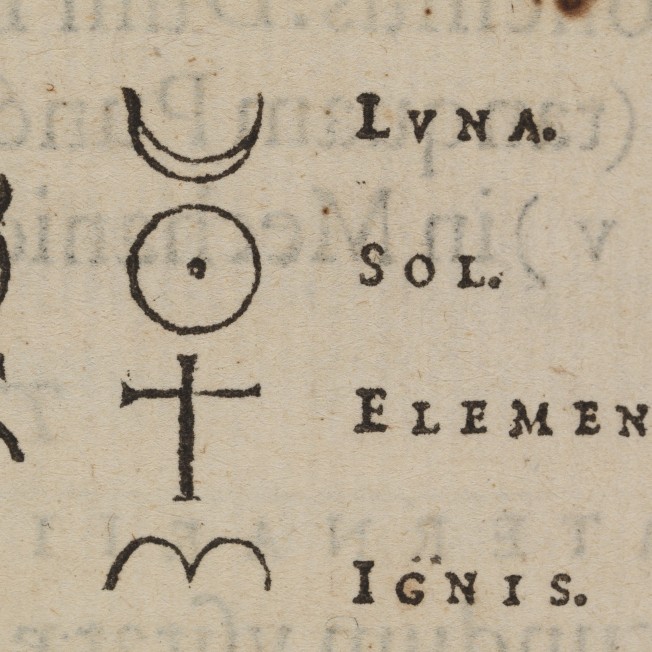 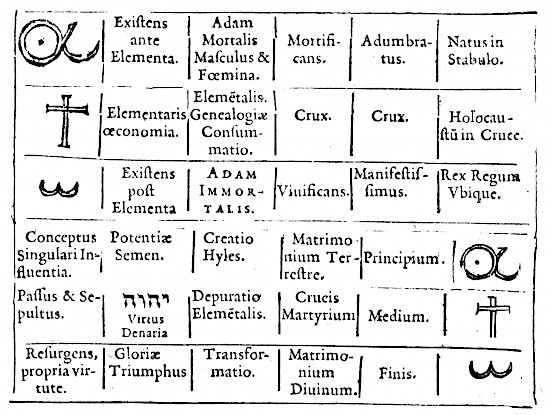 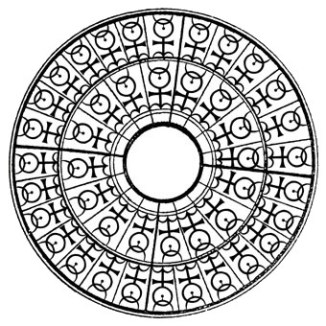 John Coulthart-Variation on the Monas hieroglyphica