One of the most notorious of Tarot decks due to its association with the infamous Aleister Crowley, the Thoth Tarot was designed and painted by Lady Frieda Harris under instruction from the Great Beast. In addition to referencing Crowley’s new religion of Thelema,  (Do what you wilt shall be the whole of the Law. Love is the law, love under will), Lady Harris includes elements of Goethe’s theory of colour and Rudolf Steiner’s Anthroposophy in the execution of the project.

In 1937 Crowley had asked his friend the playwright Clifford Bax to find an artist to realise his longstanding ambition of re-designing the Tarot deck along Thelemic lines After two artists failed to show Bax invited Lady Frieda, then aged 60, to met Crowley. Third time around indeed proved to be a charm and they worked together on the deck for 5 years. Crowley initiated Lady Frieda into his mystical order the A∴A∴ and Lady Frieda Harris persuaded Crowley to break somewhat with Tarot tradition in the Thoth deck. Surprisingly Crowley seemed to develop a genuine affection for Harris and she in turn was devoted to him up to and during his last difficult days in a Hastings boarding house.

Crowley re-named several of the Major Arcana from the Rider-Waite-Smith, for instance Trump XI Strength becomes Lust and Trump XX Judgement becomes The Æon. Naturally the Hebrew letter and astrological correspondences are changed because no two occultists have ever agreed on such matters. The astrological significance of the Minor Arcana is very comprehensively outlined in the accompanying Book of Thoth written by Crowley. 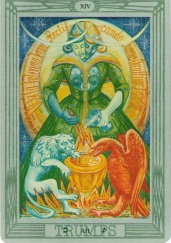 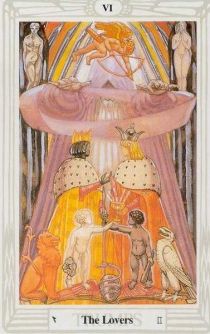 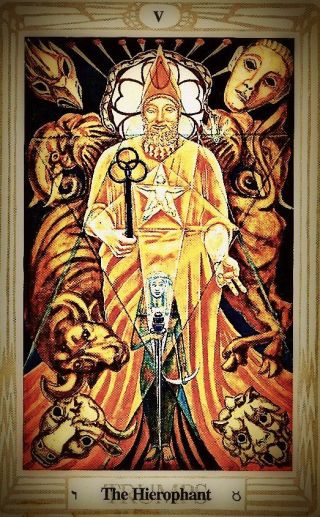