Skip to content
The volatile political situation of 1930’s Europe with the rise of competing extremist factions saw the increased use of art for propaganda purposes, and also the realisation that propaganda itself could be an art form (Hitler, Goebbels and Mussolini were all failed artists: Hitler of course was a mediocre painter; Goebbels and Mussolini fifth rate novelists). Nowhere was this more apparent than Spain, which after the military uprising by General Franco and his fascist inspired Nationalists against the democratically elected, left leaning Republic descended into a vicious Civil War that soon took on an international dimension.

The above poster commemorates the successful defence of Barcelona by members of the anarcho-syndicalist trade union CNT-FAI (Confederación Nacional del Trabajo-Federación Anarquista Ibérica) on 19th of July 1936. Although the government had denied arming the anarchists, union members led by Buenaventura Durutti captured weapons from army barracks, manufactured home-made grenades and improvised armoured vehicles leading to the defeat of the rebels. After the events of 19th of July  the CNT-FAI became the de facto power in Barcelona and implemented a social revolution that George Orwell pays eloquent tribute to in his memoir Homage to Catalonia.

Below is some fine examples of the posters that would have lined the buildings and windows of the Republican controlled zones. 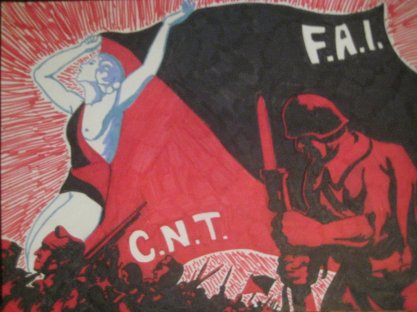 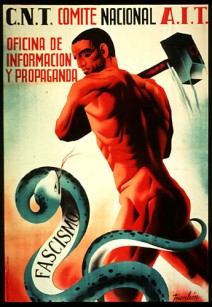